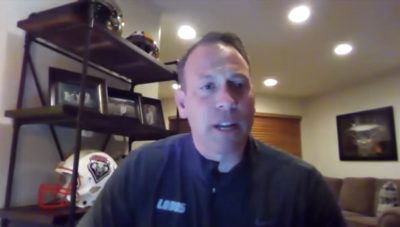 New Mexico Athletics Director Eddie Nunez said the decision of postponing the Colorado State series was made by Larimer County on Tuesday night.

The New Mexico vs Colorado State series has been postponed after Lobo assistant coach Scott Padgett was exposed to COVID-19.

UNM sent a press release on Tuesday afternoon saying Padgett had been exposed, but that he and the rest of the travel party had tested negative on Tuesday. Both schools agreed that it was safe to play the two-game series that was scheduled for Tuesday at 9pm MT and Thursday at 6pm MT. Thirty minutes before tip off for the first game, as players had already started warming up at Moby Arena, Colorado State announced those games would not happen this week.

New Mexico athletic director Eddie Nunez said the decision was made by Larimer County as a precaution. He said he believes Padgett was exposed sometime between Saturday and Sunday. Padgett did make the trip to Colorado but went into isolation when he found out the individual tested positive on Monday night. The team trainers and doctors began contact tracing early Tuesday morning.

The person who tested positive started showing symptoms on Tuesday. Padgett does not have any symptoms and tested negative, but Larimer County deemed him a presumptive positive.

The Lobos headed back to the hotel after the announcement was made.  Nunez said this was a “step by step situation” and that UNM will continue to assess the situation on Wednesday morning.

New Mexico Athletic Director Eddie Nuñez on the decision to postpone both games against Colorado State this week: pic.twitter.com/BcuC2McrGo