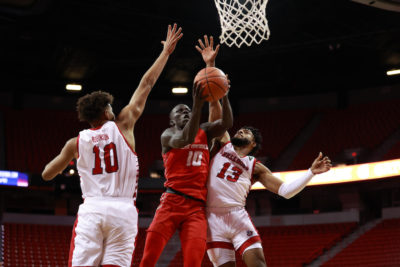 Wednesday’s game was the end of the season for the New Mexico men’s basketball team, as well as Paul Weir’s time as the head coach. The Lobos lost in the first round of the Mountain West tournament with an 85-77 result in favor of the Fresno State Bulldogs.

New Mexico wasn’t able to play a single game at home and the team found out their coach was leaving at the end of the season before the season was over. Senior Makuach Maluach said the team could’ve easily given up, but he is proud of the fact that they kept going.

“We could’ve thrown in the towel and said, ‘this is it.” But we didn’t and came in everyday and worked,” Maluach said. “I love these guys, every single one of them. I’m just really proud of them.”

The Lobos were off to a good start on Wednesday with freshman Javonte Johnson getting hot in the offense and leading all scorers with seven points halfway through the first period. Those seven points included a very confident dunk.

New Mexico found a double-digit lead of 10 points with 13:01 on the clock in the first half. Fresno State fought back and eventually tied the game. The last few minutes of the first period didn’t see much scoring from either team but New Mexico came out on top 35-34.

The beginning of the second half was also close. Four minutes into the game New Mexico was up by one point at 45-44, then Fresno State tied it with a free throw. Eventually the Bulldogs took control and led by as many as 15 points with five minutes left in the game.

Four Lobos scored in double digits with some players who haven’t gotten hot in the offense very much this season. Jeremiah Francis led with 19 points going 6-of-8 from the field and a perfect 4-of-4 from beyond the arc. Maluach followed with 16 points. He only made two field goals but made 11 out of his 12 attempt from the free throw line. Isaiah Marin got 13 points and Johnson recorded 10.

Special Assistant to the Head Coach Dave Pilipovich, who joined the Lobos in October 2020, took over the postgame press conference.

“New Mexico may be a little behind right now with this current situation, but it’s going to get back,” he said. “Just be patient… In time they’re going to be back cutting nets down and playing on Saturday nights here in the Mountain West Tournament.”