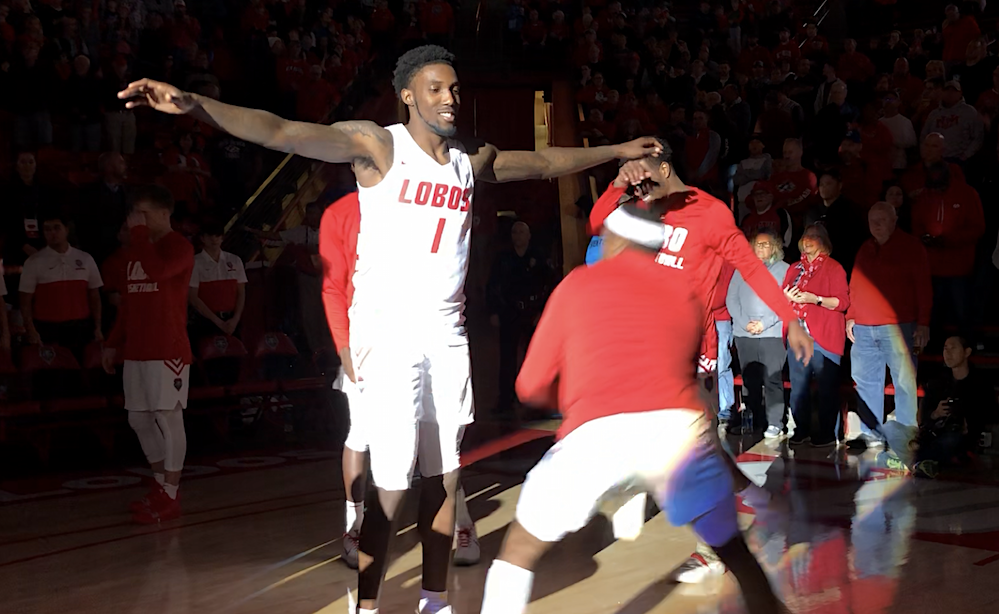 New Mexico overcame another sloppy start to finish 2019 with a 74-69 win over the UC Davis Aggies on Sunday afternoon.

With that result, UNM improves to 13-2 overall and remains undefeated at The Pit with a 10-0 record in Albuquerque.

New Mexico found itself down 11-6 by the 11:38 timeout, which wasn’t too shocking as the Lobos were shooting at 15.4% from the field. However, the home team started climbing back up and finished the half shooting at 40.7%.

Vance Jackson hit a three-pointer when the clock was running out and put the Lobos up 35-32. Players started walking up the ramp but officials called them back for a review. A foul was marked on UC Davis and Vante Hendrix added one more point for the Lobos from the free throw line. Two seconds were added to the clock, but the Aggies didn’t accomplish anything with them.

Lobos struggled during the first half of their last game. They’re struggling today too, shooting at 15.4% FG pic.twitter.com/TVpILjtL0H

Things didn’t get easier for the Lobos in the second period. UC Davis managed a seven-point run during this half, and both teams traded the lead six times. Zane Martin and Makuach Maluach, who had scored two and four points respectively during the first half, stepped up and got eight and 10 points.

“I had a feeling that we were going to be in for a game like this,” said UNM head coach Paul Weir. “You have to tip your cap to UC Davis for playing their hearts out and taking us right to the wire. Fortunately, we have a great resilient group of guys that continue to find a way to come out with wins. I’m thankful to have the players we have.”

Corey Manigault led all scorers with 20 points and four rebounds. This was the second game in which Manigault made it into the starting lineup. When asked if this was going to help him prove he belongs there, Manigault said that starting or not was hardly a priority for him.

“It’s not really a way to prove myself. I’m just trying to help my team win. As long as we win, I’m cool,” he said.

The second half also saw a little bit of drama. Hendrix was diving for a lose ball and UC Davis’ Damion Squire was not happy so a fight almost broke out. Double technicals were given to Hendrix and Squire as well as Vance Jackson and Matt Neufeld.

Martin also received a technical but not related to that incident. He got a dunk to get the Lobos a 56-54 lead and then flexed in front of the fans.

During the postgame press conference Weir said he was proud of his team for finishing out successfully even with bumps along the way. He specifically talked about a “calmness” this roster had that is different from past years. He called his players an experienced and resilient group that have the makings to become a championship team.

Up next, New Mexico heads to California to reopen Mountain West play against the San Jose State Spartans on Jan 1.

“I think that with a little more practice we will be ready,” Hendrix said. “If we continue to come outing compete every night, I think it will make us more prepared.”

Loading...
Newer Post
Lobos travel to California for first game of the year
Older Post
New Mexico gets ready for last non-conference game of the season