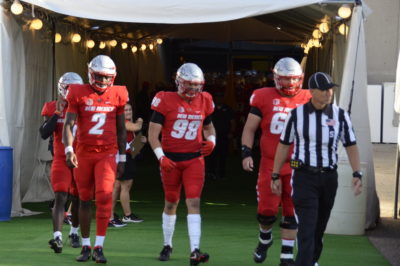 The Rio Grande Rivalry is back in action this Saturday as the New Mexico State Aggies visit Albuquerque to take on the University of New Mexico Lobos for what will be the 111th encounter.

NMSU and UNM have been playing against each other since 1894. This rivalry game had been played for 74 years straight, until last year when it wasn’t able to be happen due to the COVID-19 pandemic. The last meeting was on Sep. 21, 2019 in Albuquerque. It was a high scoring game in which the Lobos pulled off a 55-52 win.

The Lobos lead the all-time series 72-33-5, although this will be the first rivalry game with head coach Danny Gonzales as the New Mexico head coach. The Lobos are a 19-point favorite this weekend, but Gonzales is not going to underestimate his opponent.

“We have a superior record in this rivalry right now…. All that means nothing,” the UNM coach said. “What that means is that it gives them all the more incentive to come up here ready to play.”

The Lobos started the 2020-21 season 1-0 after grabbing a 27-17 win over the Houston Baptist Huskies last week. New Mexico is on a three-game winning streak for the first time since the end of the 2016 season and the beginning of the 2017 season.

Kentucky transfer Terry Wilson earned the starting quarterback position and did not disappoint in his debut with the cherry jersey. Wilson went 22-for-28 for 178 yards and helped with three touchdowns against HBU.

The Aggies are entering Saturday’s contest with a 0-2 record after losses to UTEP and San Diego State. The NMSU offense has had a slow start this season, only owning one touch down and a total of 13 points so far.

Jonah Johnson, a junior, has been the starting quarterback for the Aggies, but redshirt freshman Weston Get is also battling for the spot. Johnson is a transfer from Fresno City College and was named a 2020 Top-11 Impact JUCO Transfer QB by Athlon Sports. Johnson has thrown for 411 yards while completing 42-of-80 of his passes (52.5%). His first touchdown of the season was against SDSU, but he also registered three interceptions during that game.

The lone touchdown for the Aggies was a pass caught by wide receiver Dominic Gicinto. Unfortunately for NMSU, he suffered a broken arm during that game and will undergo surgery, which means he will likely sit out the rest of the season.

NMSU has to pick up more momentum on offense, but the defense is showing some potential. The Aggies allowed a combined 58 points in the first two games. Although the Aggies lost 10-28 to SDSU last Saturday, they held the Aztecs to just 139 yards of total offense and 6-of 19 passing (76 yards).