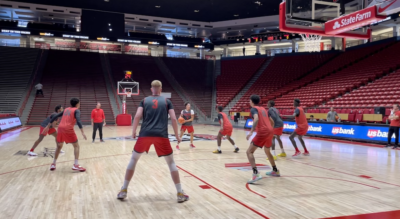 New Mexico head coach Richard Pitino is still waiting for the Lobos to understand what makes a good team.

The Lobos will play their first (not close-door) game against another opponent this Friday as they host New Mexico Highlands for an exhibition game. They held an intrasquad scrimmage this past weekend in front of fans at The Pit, but Pitino said he wouldn’t look too much at those stats and that the event had more of an All-Star game feel to it.

Are the Lobos ready to surprise everyone and take over the Mountain West conference? Not at this point, there is a lot of work to be done. However, the effort to improve is there. Here are some notes from Wednesday’s practice.

The 6’7 guard is clearly athletic and can bring energy to the team. He was actively going for rebounds and had some nice blocks on Wednesday. Although Pitino said Kuac is still learning to be more productive when he doesn’t have the ball in his hands, it’s obvious he could be dangerous if he plays his role correctly.

“If you are this freak athlete, go block shots, go offensive rebound, get out on the break,” Pitino said. “Be that, play like that. Today he did a lot of that, which was great to see…He’s one of the best athletes I’ve seen.”

New Mexico practice this morning… Emmanuel Kuac (@Emmanuelkuac4) is improving. Looks more confident, is obviously athletic. He can dunk, goes for blocks and rebounds. Definitely has potential to do fun things this year. pic.twitter.com/Qko4DFpMlx

Jamal Mashburn Jr., who followed Pitino from Minnesota, has a good understanding on what the head coach is looking for. He was asked about Jay Allen-Tovar after Wednesday’s practice. The sophomore guard said he was impressed with how far his teammate has come.

“When he first got here he was kind of floating around,” he said. “Now he’s being more of a defender with his moves, being aggressive, which is what we need.”

Allen-Tovar came to New Mexico from Salt Lake CC, where he started in 17 games while averaging 10.6 points, 6.5 rebounds and 1.0 assists per game his sophomore year. He also registered a total of 30 blocks and 16 steals.

Sebastian Forsling could be good…

But he’ll have to be patient. He has a couple moments during practice when he plays aggressively, but the 7’0 center is still a freshman who is also used to playing a different style of basketball. It’s clear the Swedish player is still learning, but he does have talent as well as a great attitude.

Javonte Johnson is next up

With Saquan Singleton out, Johnson will have to step into a bigger role. He is fast (second fastest runner behind Jaelen House) and is a talented shooter. Pitino describes him a versatile player and one of the hardest workers on the team. Singleton’s absence will certainly be felt, but the senior will be cheering on Johnson from the sidelines.

New Mexico 6’6 guard Javonte Johnson will take on a bigger role with Saquan Singleton sitting out. @otn_jay is using the higher expectations as motivation. @Saeitaintso_ thinks he can handle it: “He’s next up.” pic.twitter.com/wXNQjFYhp6