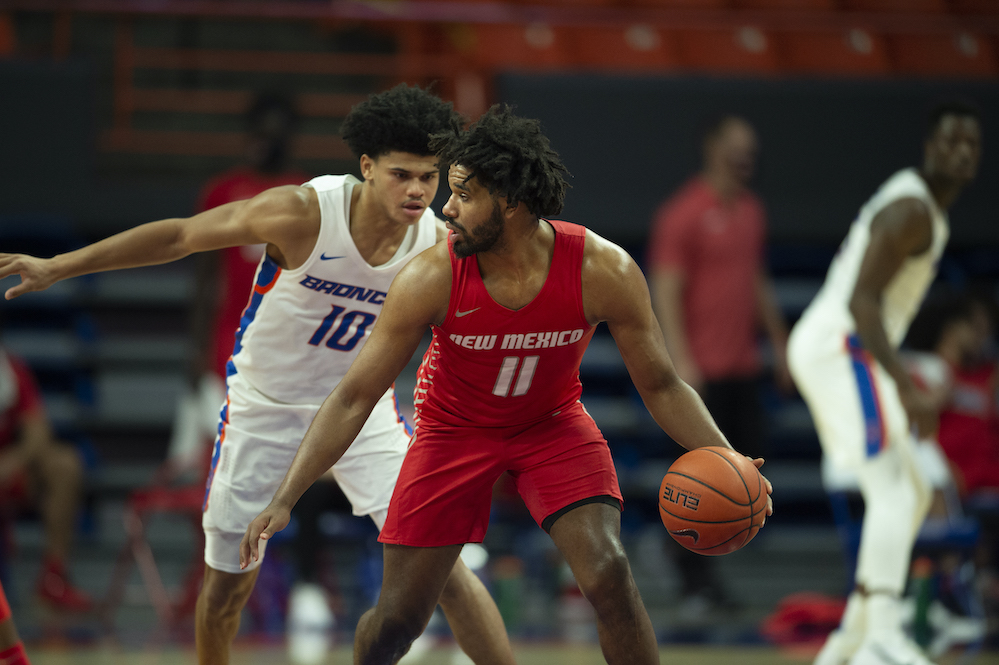 As expected, the Broncos proved to be more challenging than any of the first three opponents the Lobos faced this season. The result was not good, but New Mexico head coach Paul Weir described the experience as a “good slice of humble pie” for his young players to eat up early in their college careers.

“We have tremendous young talent on this team and we just went into a very experienced team that plays the right way and hopefully there is a lot to learn from that,” Weir said. “I told them that’s the biggest positive to me. We can learn and grow from this.”

Leaders
Makuach Maluach was the only Lobo to score in double digits. He led the team with 13 points going 5-of-12 from the field.

The Broncos had four players get double figures. Derrick Alston led all scorers with 20 points through 8-of-13 shooting. RayJ Dennis got 16 points, while Abu Kigab and Emmanuel Akot got 12 points each.

Rebounds
New Mexico broke a program record with 79 rebounds against LeTourneau on Dec. 17. This was important for the team because rebounds are something Weir has been emphasizing since the preseason. The Lobos had the height advantage against their previous opponents, but Boise State didn’t lack size. The Broncos outrebounded the Lobos 35-29.

The Lobos were down by 10 points at halftime and fell behind even more with offensive struggles during the second period. They went from shooting 42.3% from the field in the first half to 26.7% in the second. They also had a stretch of over five minutes when they couldn’t score a field goal.

“The quality of our shots weren’t great,” Weir said. “You have to tip your hat to Boise State, they made us make a lot of tough shots.”

He also said that another reason for the struggle was not being patient enough and taking shots that weren’t really there. This, he explained, was something that showed the inexperience of a lot of the guys.

Defense
Not everything Weir saw was bad. He thought his team started the second period with a strong defensive performance against a Broncos group that had shot the ball at 61.5% during the first half.

“We had them under 30% field goal there for a while. We started the half getting more stops,” the coach said. “Unfortunately we just had a tough time taking care of the basketball tonight.”

Free throw struggles
Although the Lobos are only four games into the season, the team has started showing a bit of a pattern when it comes to free throws. Once again, the team struggled from the charity line, only making 52.6% of their shots from there. Weir said that not having their own facility makes it more difficult for guys to get extra shooting time. Practices, he said, have to emphasize other important basketball areas.

Keith McGee’s ankle
Senior Keith McGee was helped off the court during the game. Weir said he had an ankle injury earlier this season and likely got reinjured. During the postgame press conference the coach said he didn’t think it was anything serious but they would know more on Tuesday.

Up next…
The Lobos face Boise State again on Wednesday at 8pm MT. The game will be available on CBS Sports.

Logan Padgett talked about what New Mexico head coach Paul Weir said in the locker room after losing to Boise State on Monday night. The teams will meet again on Wednesday.

“We’ve seen them throw their first punch and now we gotta throw ours.” pic.twitter.com/0dZY2Rb0aa