New Mexico senior Saquan Singleton is emerging as a leader 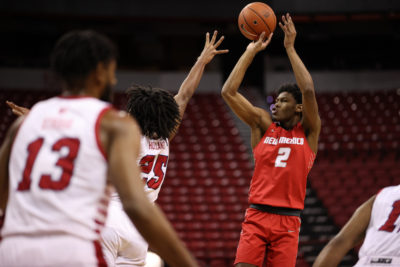 Before freshman Sebastian Forsling was even done packing for New Mexico, he had already received a text from Saquan Singleton.

“I can learn from everybody, but the one who has really taken me under his wing is Saquan Singleton,” Forsling said. “He’s been showing me around ever since day one. He was the first one to text me.”

With a relatively inexperienced roster and a lot of new faces, the New Mexico Lobos are going to need someone to step up. Singleton appears to be that guy.

The 6’6 senior guard from New York transferred to New Mexico last year, choosing the cherry and silver over Kansas State, TCU, Pacific and Alabama. He came from Hutchinson Community College where he averaged 11.8 points per game while shooting at 54.3% from the field, 7.3 rebounds and 4.8 assists.

His first year playing Division I basketball did not go as planned. He was part of a roster that finished the season with a 6-16 overall record and only two wins in the Mountain West conference. Singleton appeared in 22 games for the Lobos while averaging 8.0 points, 4.5 rebounds and 3.4 assists per game.

He shot at 41.5% from the field, but he only attempted 12 shots from beyond the arc and made two of them. He said one of his goals for this season  is to work on shooting, especially his outside shot.

“I’ve definitely worked on it so much. This summer I didn’t go back home,” Singleton said. “I stayed here and really worked on it a lot because I see how they played me last year, but they definitely aren’t going to play me like that this year.”

Saying last season was tough for the Lobos is an understatement. The team wasn’t able to play or practice at home. Losing most of their games while constantly being on the road took a toll on them, but the leadership of one particular guy was what kept the Lobos from completely giving up. Singleton said Makuach Maluach, now playing professionally in Finland, taught him what it meant to be a real leader.

“I learned from Makuach, picking up what he was doing, like the way he was carrying himself on and off the court. He was just wonderful,” Singleton said. “Really just trying to piggy back off him, see what he did and translate that.”

Singleton said Makuach told him to open his arms to his new teammates and to remember to enjoy the whole experience because his college career will over in the blink of an eye.

Head coach Richard Pitino said there is no doubt Singleton will be a key component for the team. The coach described him as the most versatile player on the roster and has been using him in four different positions during practice. Pitino said that what he brings to the table is a lot more than just talent. Singleton is easy to get along with and takes initiative to get involved as much as possible, even in recruiting, without being asked to do so.

Sebastian Forsling said Saquan Singleton took him under his wing and was the first player to text him before he got to New Mexico. Here is Richard Pitino talking about @Saeitaintso_’s leadership: pic.twitter.com/4Njoi9kqiE

“Special person. He is a good player but he’s got character. He’s got great leadership ability… He’s got all the intangibles that you are looking for,” Pitino said. “We need the older guys to separate themselves the way that Saquan has done, not just on the court but off the court. They way he handles himself, he is a great leader for the guys to follow.”