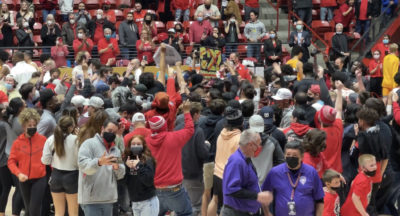 New Mexico pulled off the upset against the No. 22 Wyoming Cowboys on Tuesday night. The court was stormed.

“Great win for our program,” said New Mexico head coach Richard Pitino. “We have a lot of respect for Wyoming. They are well coached, they are talented, they are tough. We finally got a win that wasn’t pretty.”

DOWN GOES NO. 22 WYOMING

It was a terrific start for the Lobos. The home team took a 5-0 lead and kept Wyoming scoreless for the first three minutes. The Cowboys scored twice in the next 30 seconds, right before the first media timeout. Mashburn scored once the game resumed to put the Lobos up 7-4, and then again to help his team reach 10 points.

The Pit got loud, but Wyoming replied and wouldn’t let the Lobos build a significant lead. The Cowboys shot poorly in the first half. They shot under 30.0% from the field for a significant amount of time (ended the period at 33.3%), but still managed to end the first half with a 33-30 lead.

New Mexico head coach Richard Pitino on defending Wyoming, a team that entered the game with the third best shooting percentage in the Mountain West. pic.twitter.com/lg0PdfpiE7

The second half opened up with Wyoming’s Graham Ike making a layup and getting a free throw. New Mexico did not make a field goal for the first three minutes of the second period.

The Cowboys got up by as many as seven points but the Lobos pushed hard to cut the deficit. With 11:30 left on the clock, the Lobos tied it at 43 points with a layup by Mashburn. He later gave them the lead with two free throws.

New Mexico continued the momentum with an offense led by point guard Jaelen House, who finished the night with 34 points on 12-of-22 shooting. House had an impressive performance on offense, but freshman center Sebastian Forsling deserves lots of credit for his defense against Wyoming’s Ike.

Forlsing lost his voice with the postgame celebration.

New Mexico center Sebastian Forsling (@SebastianForsl5) lost his voice celebrating in the locker room. Great game for the freshman who was supposed to redshirt this year, he is improving so much. pic.twitter.com/6fS3ggrNyY

Jamal Mashburn Jr. and Jay Allen Tovar also finished the night scoring in double digits with 18 and 15 points respectively. As a whole, the Lobos shot at 54.0% from the field.

This was Pitino’s first win against a ranked opponent as the head coach of the Lobos. New Mexico improved to 11-14 overall and 3-8 in the Mountain West. Wyoming fell to 21-4 overall and 10-2 in the conference.

Up next, New Mexico hosts another tough MW opponent as the Colorado State Rams visit The Pit on Thursday.