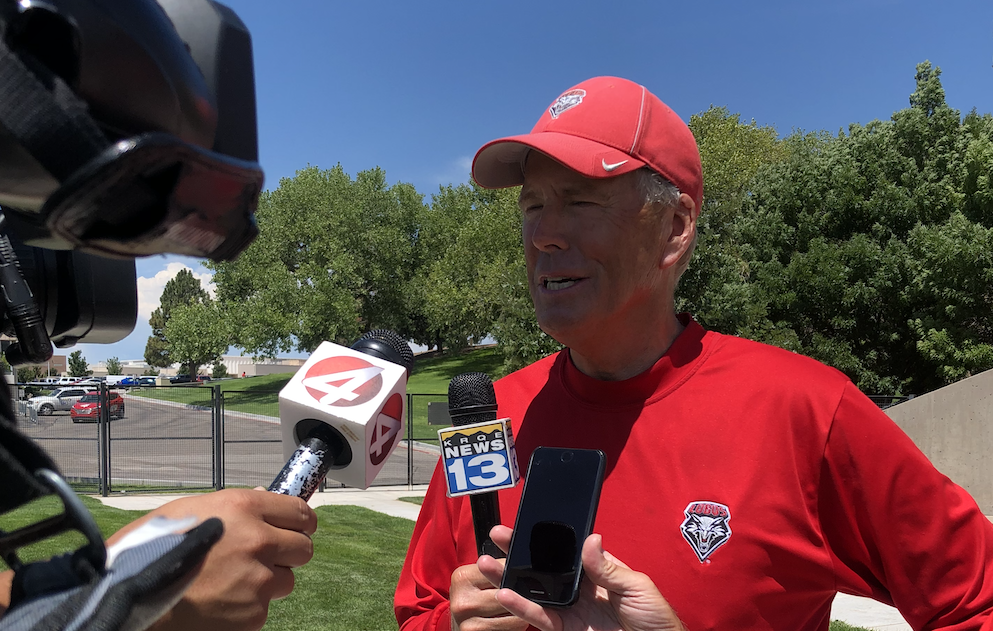 Q&A with Bob Davie: One Week Until Kickoff

With the Lobos opening their 2019 fall season next Saturday Aug. 31, New Mexico football head coach Bob Davie didn’t share much on what to specifically look for on the field. He did however, talk about the positive attitude he notices on the roster and how much physical preparation this offseason has seen.
You have about a week before your first game. How is the team feeling right now?
You realize how long they have been out there, you realize how much they have invested in this. I will say this, this is in some ways the youngest teams I’ve had, but it’s probably the most motivated team that has truly invested the most hard work. We had three 80-play scrimmages. We had an impromptu 40-play scrimmage. I’ve never had a team that put as much physical preparation into this. We have to because we are extremely young. None of us know how it will go exactly, that’s why this it is such a great game. But I can honestly say this team has done everything we’ve asked and has been such a pleasure to be around.
You’ve said this is the most positive attitude you’ve seen from a team in a while. What are some of the specific things that make it seem so positive?

Just to be able to do what we’ve done with them. The scrimmages, contact, as much as we have. You don’t do that unless the team has tremendously bought in starting in the offseason. Just to be able to stay through that. Knock on wood, we’ve had no real catastrophic injuries. There is one, Andrew Erickson had an ACL injury in a non-contact drill the other day which is really disappointing. He is a walkon put on scholarship because he has made a lot of progress.
Specifically there are so many things. We had a 3.04 GPA this summer with the football team. Coming off a 2.95 in the spring, which is the highest in the history of the school. The year was the highest in the history of the school both fall and spring. We asked our team to do some things this summer that nobody else on this campus was asking people to do and they responded in an unbelievably positive way. I’m not going to go into details but the level of investment, the level of doing the right things on a day-to-day basis, they have passed every test with that. How good we are? We will find out, but I’ll telling you right now, I’m proud of this team and I’m excited about this team.

Our senior captain hadn't shaved his beard since June 10, 2016 when returning from a church mission. Yesterday, thanks to a generous $5,000 bid from Dee Dennis towards the Lobo Scholarship Fund, Stapley shaved it off with the help of his friends. Check it out! #GoLobos pic.twitter.com/G8aHrJZv09

Last year a video of Aaron Blackwell went viral, which obviously brought a lot of buzz and a lot of energy around the team. This year seems like it’s a little bit more quiet.
None of that stuff you can sustain. If you notice, I’m not on social media, I’m not big on a selfie. I’ve never done a selfie ever by myself, where I take my face and show everybody, ‘ok look where I am right now.’ That’s stuff is not sustainable to me. This stuff is eternal. Just like Brian Urlarcher being here yesterday. I could’ve made a big thing where we make a big deal out of that. Brian Urlacher showed up here at 7:30am, none of our players even knew he was coming. That’s the stuff that is the team building. I don’t feel the need to have a viral video and all that stuff. And honestly Blackwell didn’t really do that, that kind of just happened.
The team just named the captains, what do you expect from each of those guys?
UNM Football 2019 captains:

It’s decided by the vote of their peers. I really can’t control who is captain. I will say that it worked out perfectly with who was voted captain. I simply went to each guy after they were voted and said, ‘is this guy unselfish?’ It was 100%. I said to each guy, ‘does this guy love football?’ it was 100%. You got unselfish guys who love football, that’s a great captain.
What are two or three things you would tell people on the stands to look for and watch on this team so they understand what is different this year?
I don’t know, we will see. It’s different out here on the practice field. We’ll see during the game, ok?

Isabel Gonzalez: Ray Birmingham retiring from Lobo baseball at the end of 2021 season

Even through struggles, Birmingham set Lobo baseball for future success

Isabel Gonzalez April 21, 2021
Isabel Gonzalez @cisabelg Ray Birmingham never applied for the baseball head coach job at the University of New Mexico, but on Monday he was e [...]
Baseball

11 months ago
© 2020 The Lair NM. All rights reserved. Designed by Urban Walrus Creative