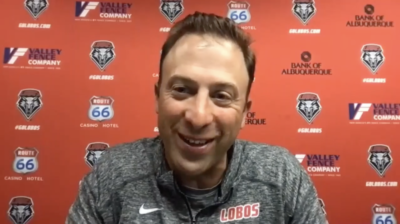 A lot of college basketball programs are getting back to work now, including the New Mexico Lobos. Head coach Richard Pitino’s family is not in town yet, but most of his players made it to Albuquerque this past weekend.

The only ones missing are Jamal Mashburn, Sebastian Forsling and Birima Seck. They are working on academic stuff, according to Pitino, and are expected to arrive by the end of the month.

The players were scheduled to have their first pick up game on Wednesday. Pitino wanted to take care of physicals and academics first, so he didn’t start real workouts right away. The team is expected to have individual instruction on Thursday, as well as a team meal.

1st day of work for these Lobos.

Jamel King will no longer be joining the Lobos in the fall. Pitino did not go into details, but seeing departures was expected since the Lobos are over the scholarship limit. The coach said he doesn’t believe he ever oversigned at Minnesota, but that right now the staff did it because of the volatility and uncertainty of this offseason from the transfer portal and the pandemic.

“It’s not something that we want to do all the time by any means,” Pitino said. “But everything that we do moving forward is what we believe is best for this program, with a million different factors that maybe not everybody knows. That’s the tough part about recruiting. The full story is not always out there all the time.”

For Pitino, less is more when it comes to plays.

“The better teams I’ve had, the less sets we’ve run, I’ve always found,” the coach said. “The more plays you run, normally you are overthinking it as a coach. From an offensive standpoint, my goal will be that they can flow into some continuity.”

But more is more when it comes to three-pointers. New Mexico wasn’t great at shooting from beyond the arc last season, and neither was Minnesota. Pitino said he doesn’t consider himself a three-point specialist, but he does understand the importance of it. He asked Mike Bradbury, the women’s basketball coach, about this subject since his team averaged 10 three-pointers per game last season. Pitino said he would like his own team to average around eight per game.

Pitino said he didn’t know about former Lobo coach Paul Weir’s signature conditioning workout of running up and down the stairs at The Pit. He is not sure his players will do that, but he did joke about how he himself would likely not be able to handle it.

“The first time I walked up those things I was out of breath.” pic.twitter.com/bmF84oQQ1H

Pitino said the non-conference schedule is close to being done. He is working on one more home-and-home series, which the Lobos will be starting on the road.

Pitino watches a lot of film, and even uses the NBA Playoffs as a teaching opportunity. He thinks the Brooklyn Nets have the best chance to win it all with the Big 3. However, Pitino has made it clear he is a Knicks fan.