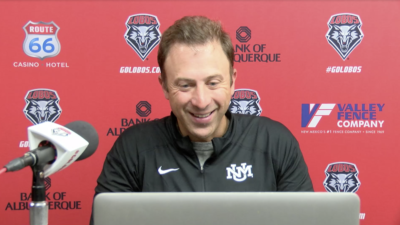 Richard Pitino’s Lobo roster has had a lot of movement lately. New Mexico added three new guys recently, while two more have entered the transfer portal. Gethro Muscadin, KJ Jenkins and Taryn Todd are the latest players to announce their commitment to the cherry and silver.

They are joining Jamal Mashburn Jr., Jaelen House and Jay Allen-Tovar as newcomers brought by Pitino for the 2021-22 roster. Jamel King, who was recruited by the previous coaching staff, still plans on joining the Lobos.

Pitino said he knows it would be unrealistic to fix the program overnight, but he is feeling good about the roster he is building. He said his staff looked to recruit players who were versatile and could fit the New Mexico culture. June, Pitino said, will be crucial because that’s when he’ll have a better feel of what this group can really do.

Pitino got a second chance with Gethro Muscadin

Pitino said he and his staff at Minnesota “poured their heart and soul” into recruiting Muscadin. The Gophers were one of Muscadin’s top teams before he chose to go to Kansas.

“We were devastated when he chose Kansas over Minnesota,” Pitino said. “Maybe it’s a little bit of faith that I get an opportunity to coach him. He’s got size. His best days of basketball are ahead of him.”

The New Mexico coach said that when Muscadin entered the transfer portal, he told his assistant coaches that he himself wanted to take the lead in recruiting him. He had already built a good relationship with him while at Minnesota.

Muscadin didn’t play much in Kansas because the team had other talented bigs, but Pitino said the 6’10 forward still got great experience by being able to learn from a talented Jayhawks coaching staff.

“I didn’t have to sell him on what I thought he could become, because he knew that,” Pitino said. “He knows I’m a fan of him, he knows what I think he can become.”

The 6’2 guard spent time at the University of North Georgia and Kilgore College. Pitino said he was one of the best three-point shooters in JUCO last year, and he is looking forward to bringing that to Lobo basketball.

Jenkins ranked 31 in the NJCAA in three-point percentage. He was shooting at 47% from beyond the arc in the 23 games he played for with Kilgore College through the 2020-21 season. This was something that obviously attracted Pitino, but the coach also said Jenkins’ work ethic and other skills would fit the Lobo roster and culture he is trying to build.

“Certainly yes, he can make the three, but he is more than than,” Pitino said. “We want to add guys who can shoot the basketball for sure, but we want basketball players. I feel like with KJ, he’s that, he’s not just a one-trick pony.”

Taryn Todd is an “impact guy”

The 6’5 guard spent the last two seasons with the TCU Frogs. He redshirted his freshman year but appeared in 26 games through the 2020-21 season, averaging  4.5 points, 1.5 rebounds and 1.3 assists per game.

247Sports had him as a three-star shooting guard and the No. 4 player in the state of Nevada in the 2019 recruiting class.

Pitino said Todd has good length and can easily get to the basket. The 6’5 guard also has the ability to play multiple positions. The coach said his goal is to always have three or four guys who could come off ball screens, and Todd is definitely a player who can do that.

“His skillset is very intriguing for what it was that I was looking for to kind of round out that class,” Pitino said.

He intends to go pro.

“He’s given New Mexico a lot. I did my best, I tried to keep him, but I certainly understand what he wants to do moving forward,” Pitino said. “I support him, I support them all in their next destination, wherever it is.”