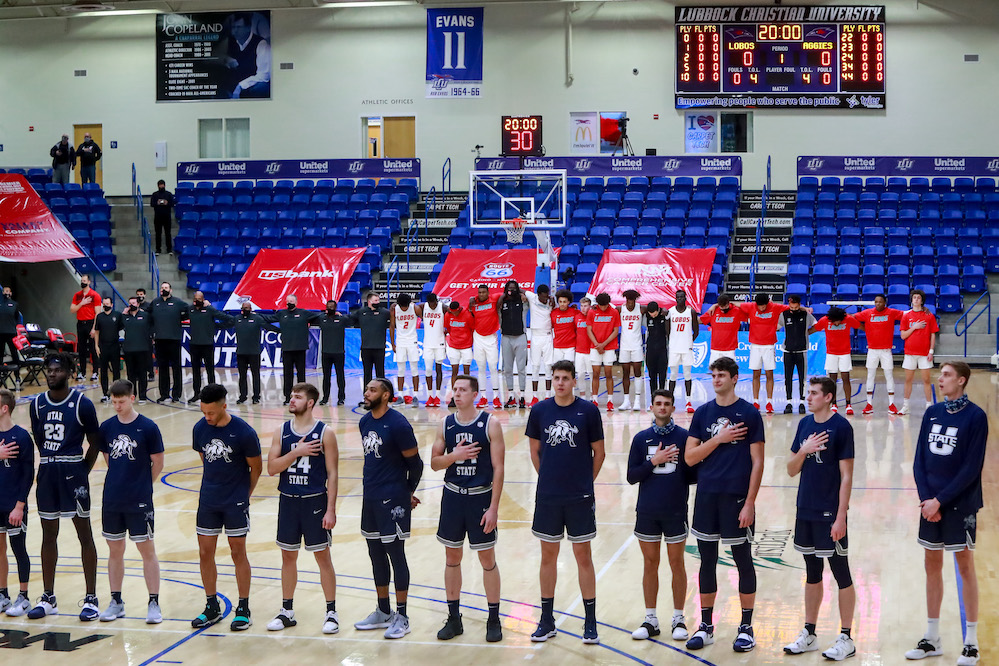 The New Mexico Lobos lost the first game of their series against the Utah State Aggies with a 77-45 result on Wednesday night.

The Lobos are now 3-5 overall and 0-5 in the Mountain West conference. The Aggies improved to 8-3, 5-0 MW. The two teams will face again on Friday night.

There were no points on the board until Utah State’s Marco Anthony got a layup when the clock read 16:48. The first field goal for the Lobos came about two minutes later when Jeremiah Francis hit a three-pointer. After two more three-pointers, both from senior Keith McGee, the Lobos found themselves leading 11-6 (13:15).

The game stayed close for a while, but by halftime Utah State was up with a very comfortable 41-18 lead. New Mexico had an ok stretch during the second period, but never good enough to get very close to the Aggies.

McGee was the only New Mexico player who scored in double digits with 10 points. As a whole, the cherry and silver is still struggling in the offense with a final stat of 26.79% from the field (this may or may not be accurate since there were stats issues all night)

What can't he do? McGee knocking down shots from all angles. #GoLobos pic.twitter.com/8KtYMXuufg

Earlier this season, head coach Paul Weir said he wanted his team to focus on the paint, especially for defense. This did not work out very well on Wednesday, as the Aggies outscored the Lobos here 46-12.

Weir said the staff is still trying to figure out which guys they can rely on, starting with a point guard who can get a more consistent offense going.

“It’s a moving target, I wish it was further along than it is but we got a lot of guys with a very thin margin between them,” he said. “I would like that to be a little bit more obvious to us, but it’s not.”

Jeremiah Francis was not the starting point guard on Wednesday, but he did have one of his better games offensively as he scored eight points. The head coach said he was happy he showed a better performance with his offense, but that he thought he struggled defensively.

It wasn’t just him who struggled in that area. Weir said the entire defense could’ve done better to help create more opportunities.

Junior center Neemias Queta led all scorers by tying his season high of 18 points by going 9-of-10 from the field. He also added six rebounds and five blocks for Utah State. Weir gave credit to Queta for being a talented player and Utah State for being good overall, but he wasn’t satisfied with his own team’s performers.

While he believes his players are capable of more, Weir admitted that the practices leading up to the game were not good, and were perhaps some of the poorer practices the team has had this season.

“It’s going to be hard to beat a team of this caliber if you’re not putting together really high level practices… We gotta find a way out of this, break through where we are right now,” Weir said.