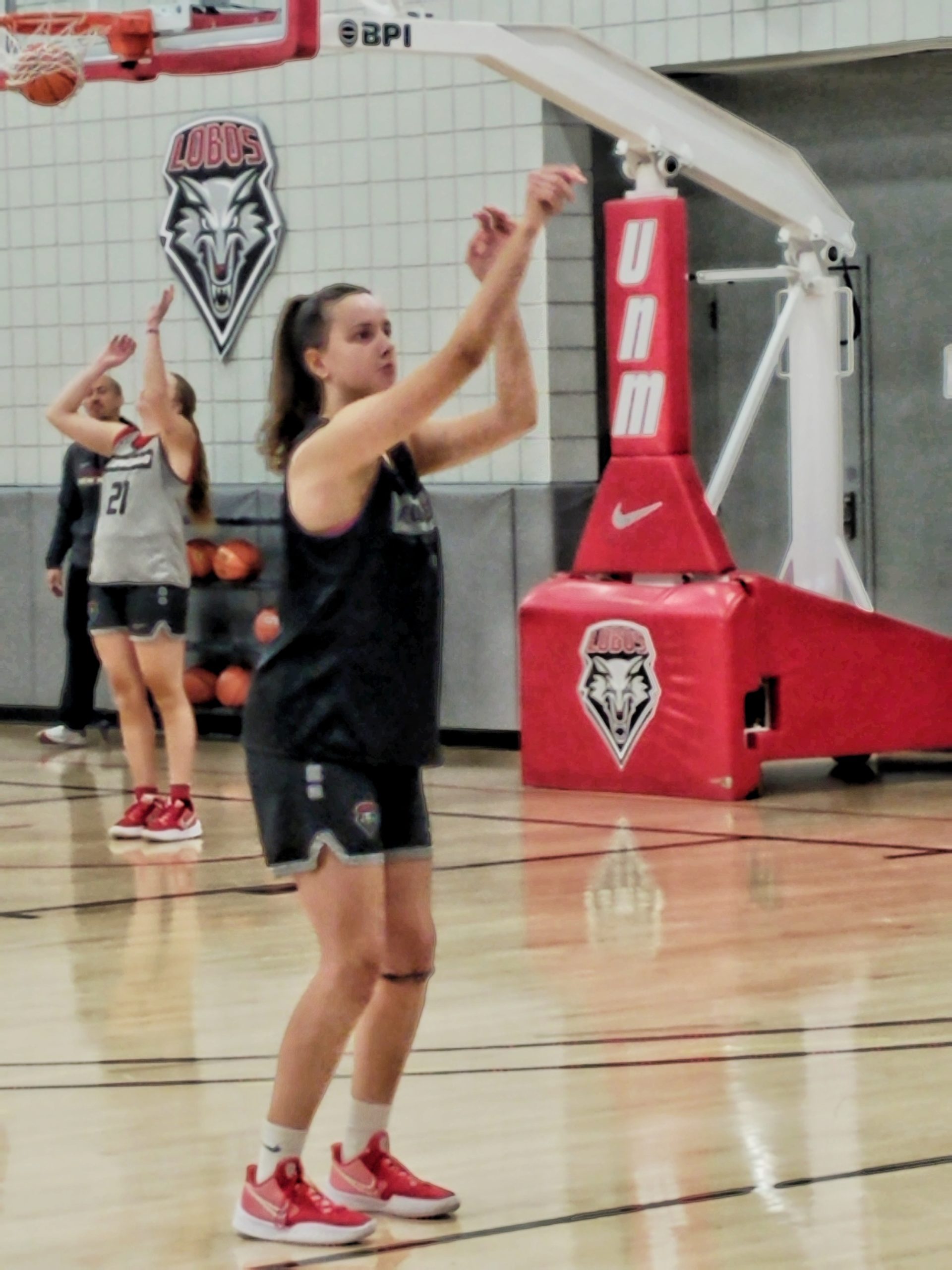 The Lair Interview with Paula Reus

One of the things I most enjoy about the first handful of games each season is seeing the new players in actual game situations, not just practice.  All summer I have formed initial opinions on how they might look and perform in game situations, but practice is not game time.  You can tell some things like athleticism, but not every athletic player is a good game player, and not every star is a great athlete.  Mandi Moore would never draw attention because of her size or jumping or speed—but her performance was as good as any Lobo.

In this year’s class I see an abundance of potential, and for one player, Paula Reus, an opportunity for minutes.  With Antonia Anderson and Shai McGruder the only two experienced posts, Paula had a chance to compete for and win playing time early on.  Everything I saw in practices looked promising.  She moved smoothly—she didn’t have the hesitation many freshmen have as they take the step from high school to larger/faster/older players in college.  She shot reasonably well, both around the basket and beyond the three point arc, and showed good judgement on which shots to take.  She saw the floor well and made some good passes from the high post to cutters or out to open spot up shooters—in fact she might be the best passing post player since Val Kast or Jordan Adams.  The biggest weakness seemed to be strength when going inside for a contested shot or a rebound.

I did this interview with Paula a few weeks ago but decided to hold until after the first few games to see how the early reality matched up against the potential in practice.  For the most part the game data matches the anticipations from practices.  She has not been lost on defense, but still needs to anticipate a little better when off the ball and coming to help.  She does not force shots, taking few bad shots.  She has an assist/turnover ratio above 2.0 (25 assists, 12 turnovers), something most freshmen struggle with.

The biggest positive compared to what I saw early summer practice is her rebounding.  Through the two NMSU games she is grabbing them at a rate a little over six and a half per thirty minutes played, and while that needs to improve with strength and experience it is not a bad starting point.  The biggest negative so far has been the shooting percentage, but that too is improving:  25% over her first six games but 50% over her last three.  Reality is likely in between those numbers.

However the biggest early assessment for any freshman is not in any of those numbers.  Early on the biggest indicator is minutes played.  Do the coaches have the confidence to put her into the games, and how many minutes does she get?  In her case, clearly the answer is Yes.  Some of that is a matter of opportunity and the makeup of the rest of the roster, but beyond that Mike Bradburry has been quite consistent in his years here:  the best players get the minutes, and he will adapt the style of play to work around them.  He has gone with three true bigs at times; other times one post and four guards; and for periods, five guards.  Any player who gets significant minutes gets them because the coaches see positive things.

In the first eleven games—through the game at Las Cruces—Paula is averaging over 17.5 minutes a game in the nine games she has been healthy enough to play.  That is the most among the freshmen this season, and the most of anyone not starting.  Also the most of any freshman off the bench on any of his teams since he has been here.  In Mike’s six seasons the only freshmen who averaged more than that for the season were in starting roles, usually because there were not enough returning players to start.  His opinion about Paula is summed up in something he has said several times:  “She knows how to play the game.”

Joe:  The first thing I have to ask you:  Do you always smile?  Every time I see you, you are smiling.

Paula:  It is kind of difficult always to be happy, but I try.

Joe:  Growing up in Spain, basketball is organized very differently than it is in high schools here. Tell us something about your history with basketball and how you got to where you are as a player.

Joe:  What has been different about the sport in America?

Paula:  I think all is different. The kind of game, the field, the fans.  All different.

Joe: What has been the hardest thing for you to adjust to?

Joe:  What has been different about the basketball?

Paula:  Here there is trouble when I put my right foot pivot then the left foot. In Europe that is not traveling—here it is.  For free throws we don’t have three defense players and two outside the free throw line.  There are a lot of other differences.

Joe: When you were playing in Barcelona, were a lot of the players older?

Paula: Yes, I was the youngest one on the team.

Joe: How did you adapt to that?

Paula:  I don’t know.  It was not a problem for me, I have always been on a team where I was the youngest.  It’s not a problem.  I have positivity in my mind.  My team has helped me with that. They helped me to be positive and forget about what I did wrong and move on and keep playing and keep doing good.

Paula:  What I need to work most is my rebounds, especially offensive rebounds.  What I do the best is….I do a lot of things well: 3-point shooting and 2-point shooting.

Joe:  What do you enjoy the best about playing basketball?

Paula:  What I like best?  When we are good–when all five on the court are shooting, we are making shots.  Then I am happy because we are doing great and having fun.

Joe: When you decided to come to the United States and play basketball, why here in New Mexico?

Paula:  I decided one and a half years ago that maybe I wanted to go to the United States to improve my English and to grow as a person and an athlete.  I think this was the best option for the grow in everything that I want.  I trust the staff here.  We talked with them via Zoom because I was in Spain. They gave me confidence and gave me the opportunity to grow.

Joe:  What has been different from what you had expected?

Paula: A lot of things. For example, the grocery stores, the kind of people that are here are different than I thought. The University is different from Spain. All is different.

Joe:  That has to be difficult when you are adjusting to a new basketball team, but also to a new living environment. How do you balance those two?

Paula: My mother and my dad help me via Zoom.

Joe:  What are you expecting in the early games?

Paula: I expect to win.  I expect that all the teammates will be involved in the court doing great things and helping each other.  And seeing all the fans here. And I expect to have fun.

Joe: What are your goals after college?  What I want to do?

Paula: I have no idea.  I’m too young, I think.  I think I want to get a master’s degree and of course one of my other kids in basketball just became a WNBA player. That’s my dream.