The Mean Green defeat the Cherry and Silver 74-65 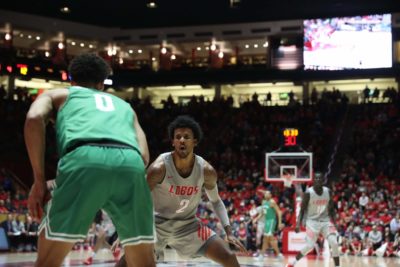 Yet again, the game started slow for the cherry & silver team. The Lobos trailed 12-3 by the first media timeout at 13:58. New Mexico struggled to get a field goal until Makuach Maluach hit a three-pointer at the 12:53 mark.

Makuach Maluach gets the first New Mexico three-pointer of the night. Prior to this, the Lobos had only gotten points from free throws (12:53 H1). It’s 12-8 North Texas. pic.twitter.com/fJkQNZlZei

Lobo fans got some hope that their team was gaining momentum when Vance Jackson tied things up at 17-17 with a shot from beyond the arc with under nine minutes remaining. He also scored the last basket of the half as the clock was running out, but the Mean Green (11-1) still entered halftime with a 35-29 lead.

Senior guard Anthony Mathis finished the night leading all scorers with 20 points. His best stat was going 11-11 from the free throw line. He had seven points from free throws in the first period. He had only attempted one field goal, which was unsuccessful. By the end of the night, he had made four of his eight attempts, with one of those being a three-pointer.

When asked about Mathis’ slow start from the field, Weir gave a lot of credit to North Texas for how the Mean Green were defending him. He also gave some credit to Mathis, who is known as a three-point specialist, for finding other ways to score.

“They did a great job of just not letting him loose. A lot of his buckets, they were just forcing him off the line, forcing him into two-point territory,” the coach said.”That’s probably the first time a team has really done that with him this year. I actually thought he did an ok job of adjusting to that and making some two-point shots that quite honestly a lot of times I tell him not to take. You gotta give North Texas credit for really running him and chasing him off the line.”

Mathis said he personally didn’t think North Texas did anything different from other teams when it came to guarding him. He did however, talk about the importance of adjusting.

“Obviously I gotta find another way to score. I tried to get on the free throw line a little bit,” Mathis said. “It’s tough. You just gotta find a way to get a win, you know what I mean? It’s not all about scoring. There are so many things. Rebounding, defense, running in transition, stopping balls.”

In an almost ironic manner, as Journey’s “Don’t Stop Believing” began playing through the speakers (which is done at every Lobo game now) with 3:14 remaining in the game, The Pit was getting empty. Lobo fans didn’t seem to think there would be a way out of that one based on how their team had been playing. New Mexico, shooting at 36.4 percent from the field, trailed by double digits several times. The team never found the lead and only tied the score once.

Up next, New Mexico hosts Penn on Saturday at 2pm before taking a week-long break.

Notes
Dane Kuiper was on the bench and in street clothes due to injury. He played less than two minutes in the second half of Sunday’s game against Central Arkansas. Weir said it wasn’t serious, but a decision is yet to be made about Kuiper suiting up on Saturday against Penn.