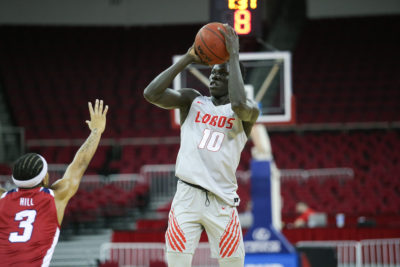 The Fresno State Bulldogs take on the New Mexico Lobos at the Save Mart Center in Fresno, California on January 30, 2021. (Samuel Marshall Photography)

No, the New Mexico men’s basketball team is not ending its season early.

The Lobos were scheduled to play the San Diego State Aztecs this week but that series has been cancelled. New Mexico did cause the cancelation, but not because the team is giving up on the season.

Head coach Paul Weir said three players came to talk to him on Monday about their own situations and that they felt they needed a break, but the players were not opting out. The coach said this type of conversations have been happening all season, but they are not a huge deal because it’s just players telling coaches what they need at the moment.

“What happened on Monday has happened 100 other times this year,” he said.

The head coach said that ever since the conference schedule came out he has been trying to change some of it to help his players deal with their unusual situation better. He hasn’t been successful, but he has tried to help them as much as he can.

“We’ve been in this situation before,” Weir said. “Not publicly to you guys, but we’ve been in it in different ways, different times, when different players are voicing concerns about things. Usually we’ve had very productive conversations that have allowed us to move forward and progress and get the train back on track going in the right direction.”

The conversations that happened on Monday got out to some media members and that’s when the news spread and rumors of the Lobos completely ending their season started. Weir said the team laughed when they heard about it.

Weir was looking at rescheduling the SDSU series but the Aztecs schedule wasn’t going to allow it, at least for now. The Mountain West conference asks for at least seven scholarship players to be on a roster for games, but Weir said it isn’t 100% mandatory. The Lobos were below that threshold this week. When Weir learned that the games wouldn’t be rescheduled, he did consider asking his players how they felt about going through with the series.

The team had a practice on Monday with a very limited group, then met again on Tuesday. Wednesday is their first day off.

This has been one of the worst seasons in recent Lobo history, but Weir said he thinks his players are still giving it the most effort they can in the situation that they’re in, and that their physical and mental health comes first.

“I have never forced a player to have to compete after voicing concerns of some kind to me or a member of the staff,” he said.

The next series in the schedule is at Colorado State on Feb. 9 and Feb. 11. Weir said the team does expect to play those games.