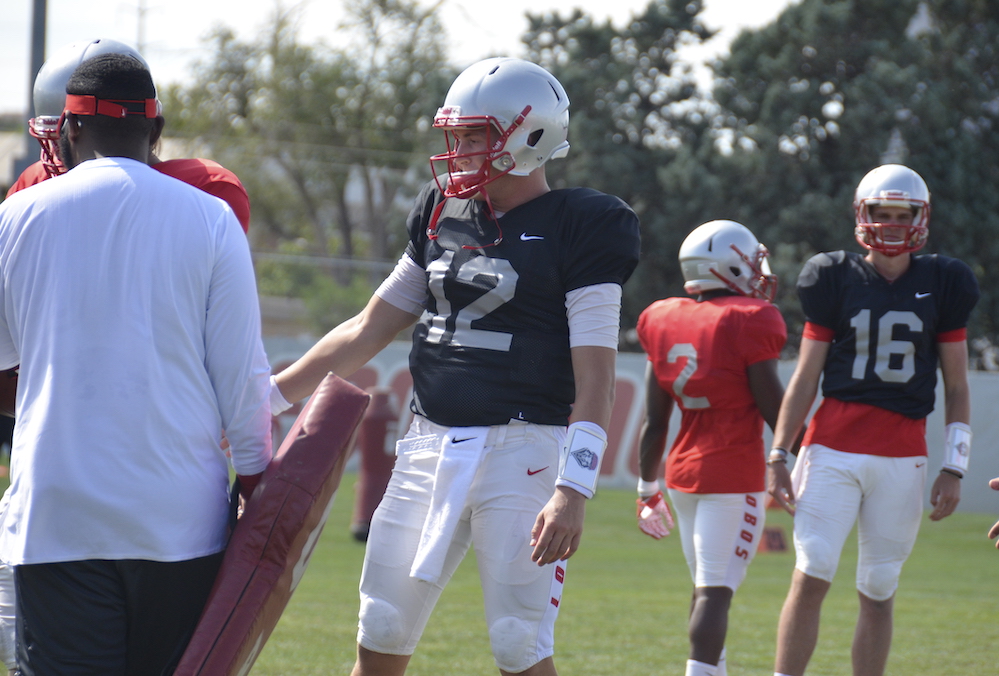 Tuitele and the Lobos prepare for Notre Dame experience

The odds are not in New Mexico’s favor as the Lobos head to South Bend, Indiana this weekend, but the second game of the 2018 season should provide a lot of experience and insight to a team that head coach Bob Davie described as one of the youngest ones he’s had.
While this is the first time ever the two schools face each other, Notre Dame is a school that Davie is quite familiar with. He was the interim head coach for a couple games there in 1995. Davie eventually went from defensive coordinator to full-time head coach in 1997 (after Lou Holtz stepped down) staying with the Irish until 2001. However, Davie won’t be making the trip as he continues to recover from a medical condition. Offensive line coach Saga Tuitele will be leading the Lobos as the acting head coach this weekend.
“We can’t be over our heads on anything… we can’t be too much in awe,” said Tuitele when he talked about playing against a high profile school.
The Lobos hosted Sam Houston State for their season/home opener and finished the night with a 39-31 victory. Starting the season with a win is always a good thing, but Notre Dame will be a whole different deal. For the first game of the season, Notre Dame picked up a 35-17 win in a road game against Louisville. The performance wasn’t perfect, but the Irish were good enough to be currently ranked no. 7 in the AP Poll.

A significant bright spot last night: the arrival of the young Irish lifting the team in big moments.

Saturday will be the home opener, which perhaps makes the environment even more intimidating for the Lobos. The Irish went undefeated at Notre Dame Stadium throughout the 2018 season and have an 11-game winning streak at home. They also have a sell-out streak of 267 consecutive games that began in 1974.
Tuitele has some specific notes on things he wants to see the team improve on such as keeping a more consistent defense and improving third down. But although not many people believe the Lobos can pull off an upset, he said he wasn’t approaching this game by only setting small goals.
“The concrete goal is obviously to win,” he said.
The New Mexico offense will have their work cut out for them, as the Irish have held opponents to 30 points or less in 15 consecutive games. Notre Dame head coach Brian Kelly talked about the extra work New Mexico is giving his staff and players with all the research they have to do with the UNM quarterbacks and the newcomers on the team.
“They have some talented players on the offensive side of the ball. Three quarterbacks that we have to prepare for and all of them are extremely capable,” he said during Monday’s press conference. “I really like the wide receiving core. They have a transition going on on defense with a lot of new faces that we are trying to, on film, watch in one game. New defensive coordinator. There is a lot of things we have to manage there.”
Injury Updates:

Despite low outside expectations, Blackwell is confident on his team
Nahje Flowers passes away
New Mexico football working on fresh start
Football 59

Isabel Gonzalez: Richard Pitino and the Lobos get ready to begin workouts

Isabel Gonzalez June 17, 2021
Isabel Gonzalez @cisabelg The New Mexico men's basketball team has had about a week and a half together. It's still too early to say much abou [...]
Men's Basketball

Isabel Gonzalez May 20, 2021
Isabel Gonzalez @cisabelg Makuach Maluach has taken the next step to continue chasing his dream of a professional basketball career. The 6'5 guard [...]