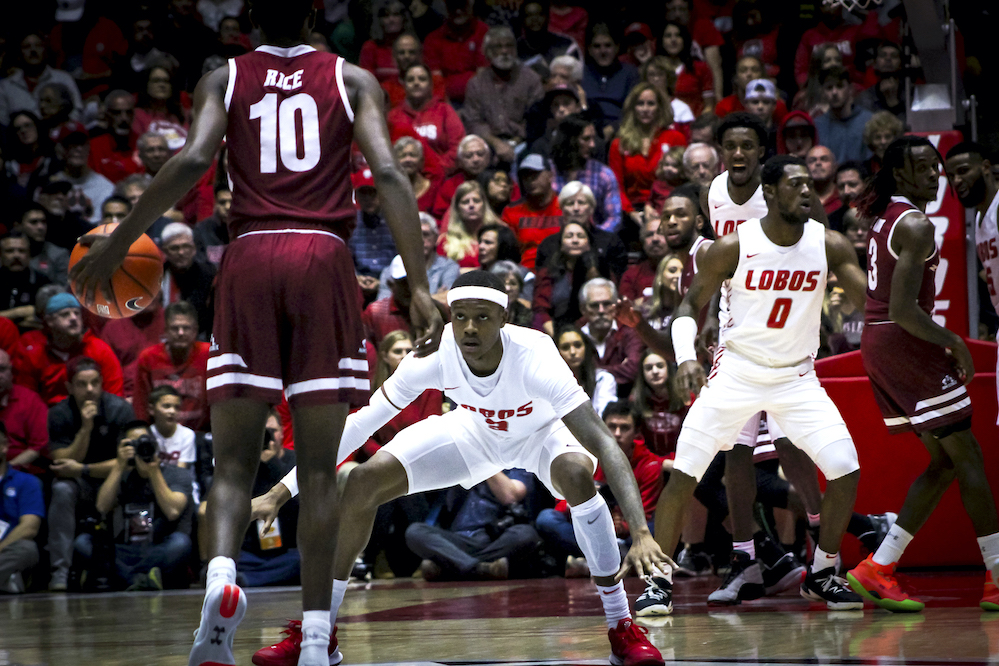 A quick turnaround has New Mexico back in action on Tuesday as the Lobos host the Grand Canyon University Antelopes.

“We gotta enjoy this win but we have to get over it pretty quickly,” said UNM head coach Paul Weir after Saturday’s win over the New Mexico State Aggies.

For Weir, the big test for his team will be whether or not the Lobos can remain focused and get their job done without being distracted by their recent success. UNM completed a sweep in the Rio Grande Rivalry and is also riding a five-game winning streak.

The coach admits that Grand Canyon, currently 4-8 overall, is not off to an impressive start but he does think they are a capable team.

“It’s great challenge for us because it’s obviously a very emotional game on a Saturday and we gotta turn around and play a game on a Tuesday against a good basketball team,” the coach said. “It’s on us to emotionally reengineer ourselves and get back to where we need to get to win on Tuesday night.”

New Mexico is 10-2 overall and remains undefeated at home with a 7-0 record at The Pit. The Lobo offense is led by JaQuan Lyle and Carlton Bragg, who are averaging 17.6 and 13.0 points per game respectively. They have won the last two Mountain West Conference Player of the Week honors.

Grand Canyon is coming in with back-to-back losses, but it’s important to look at the opponents and what the Antelopes could’ve learned from them. The losses came from Liberty University and Northern Iowa. Neither of those teams can be taken lightly.

The Liberty Flames are one of the few teams in the nation that remain undefeated with a 12-0 record. Liberty and GCU, who faced on Dec. 8, kept trading the lead for the first half of the game and early in the second period. The Antelopes even found the lead with 10 minutes remaining. However, the Flames were able to succeed thanks to a 15-0 run that pushed them ahead.

Northern Iowa is not doing bad either, currently holding a 10-1 overall record that includes a win against the then no.24 Colorado Buffaloes a week ago. The Panthers shook the Antelopes right away, finding a 43-26 lead in the first period as Grand Canyon was shooting at 31.25% from the field.