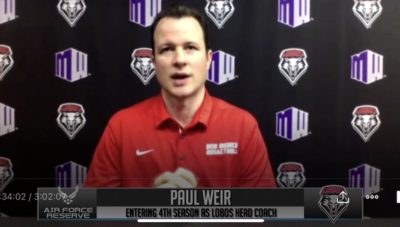 The Lobos hadn’t been allowed to have full practices recently due to the COVID-19 cases in Bernalillo county. This made the team leave to Moriarty, a city in Torrance county that at the time wasn’t considered “red.” They’re now back in Albuquerque, but all team activities were paused for precautionary reasons after the positive tests.

College basketball is scheduled to begin on Nov. 25. That’s less than two weeks away, which is likely more stressful than exciting for the Lobo coaching staff who hasn’t been able to finalize a non-conference schedule. As things stand right now, the team can’t have full practices, much less host teams from outside the state. If the Lobos play on the road, they’re expected to quarantine for two weeks after they get back to New Mexico, no exceptions even with negative tests.

The football team is currently using Las Vegas, Nev. as a home base because restrictions are less strict. It wouldn’t be completely out of the questions for the basketball team to do the same thing.

“Not playing basketball in the state of New Mexico is un-New Mexican, not playing in the Pit would feel the same way,” Weir said. “But with this virus in our society and communities, we have a lot to think about and we’re all kind of at that mercy.”

Other topics discussed during the press conference:

Scouting the competition?
No, Weir admitted that he hasn’t done much of that lately. During a typical season, the coaching staff probably would’ve already looked more into their opponents, especially those with new head coaches or high profile players. Weir is still getting to know his own roster and still has to figure out how to have full practices.

Javonte Johnson
Weir said that when freshman Javonte Johnson first signed with New Mexico, his dad asked about the possibility of redshirting the first year. The coach said it quickly became obvious that he didn’t need it, Johnson is ready to play.

New conference schedule
Earlier this week, the MW announced a new format for the 2020-21 schedule. It will now consist of 20 games, with teams facing each other in a two-game series with a one-day break between those games.

While San Diego State fears the potential of having to play more games at elevation, Weir said the new style would technically benefit the Lobos because of where Albuquerque is located. However, he said that with all the uncertainties the pandemic brings, the benefit is not 100% guaranteed.

Seniors not feeling like seniors
In the last few press conferences, Weir kept stressing the importance of seniors to step up and be leaders for what is a very young roster. On Thursday, the head coach said he feels the two seniors, Makuach Maluach and Keith McGee, haven’t had a chance to fully embrace their new role.

“Our current competition is the virus… those seniors are really freshmen in this too, just like I am,” Weir said. “I think we are all learning how to work through this as best as we can.We have good days, we have bad days.”